Corner Stone IP, A Foundation to Your Success！

Wyeth LLC is a wholly-owned subsidiary of Pfizer Inc., the world’s largest research-based biopharmaceutical company. It develops premium-quality and scientifically-designed nutritional products for infants and young children, as well as pregnant and lactating mothers.

Wyeth LLC began to sell Wyeth branded infant milk powder (in Class 5) in China since the 1980s. By virtue of extensive use and promotion, its marks “Wyeth” and “Wyeth in Chinese” have acquired high reputation and wide influence in China.

In May 2001, a local enterprise named Bowu Trading Store at Dongfeng Town, Zhongshan City in Guangdong Province of South China, applied for registration of six “

Wyeth LLC lodged oppositions against these marks with China Trademark Office (“CTMO”) and later reviews of opposition with Trademark Review and Adjudication Board (“TRAB”), and instituted administrative lawsuits with Beijing First Intermediate People’s Court, but none was upheld. After these marks were granted registration, Wyeth LLC filed invalidations with the TRAB. Later the case underwent the Court’s first instance and second instance, then back to the TRAB for re-examination, and the Court’s another round of first instance and second instance. In total, it lasted for 16 years and underwent more than a dozen administrative and legal procedures.

2. A Long and Struggling Battle

The applications for the 6 disputed marks were filed on May 29, 2001 and published on April 21, 2002. Wyeth LLC lodged oppositions with the CTMO, later reviews of opposition with the TRAB and lawsuits with the Court, but was not upheld.

GW was dissatisfied with the TRAB’s decisions and sued to the Court. Both the first instance Court (Beijing First Intermediate People’s Court) and the second instance Court (Beijing High People’s Court) held that the disputed marks did not contravene Article 10.1.8 of the Trademark Law, reversed the TRAB’s decisions and ordered the TRAB to make new decisions.

On April 21, 2015, the TRAB invalidated the disputed marks once again on the grounds that these marks contravened Article 41.1 of the Trademark Law. Once again, GW was dissatisfied with the TRAB’s decisions and sued to the Court. Then both Beijing Intellectual Property Court and Beijing High People’s Court dismissed GW’s claim and the case finally came to an end.

On March 30 and May 10, 2018, Beijing High People’s Court held via its judgments including (2017) Beijing-Admistrative-Final-No.487 that the disputed marks contravened Article 41.1 of the Trademark Law, “the registration of a trademark was acquired by other improper means”, and thus should be invalidated.

The reasoning of Beijing High People’s Court is as follows: “WYETH” is not a common foreign word in Chinese. It together with its Chinese equivalent possess high originality and distinctiveness. The evidence produced by Wyeth LLC is sufficient to demonstrate that the marks “Wyeth” and “Wyeth in Chinese” it used and registered in relation to infant foods had had wide influence among the relevant public in China, prior to the application date of the disputed marks. The original applicant of the disputed marks Mr. Guoji LU and GW should be aware of that. The original applicant of the disputed marks applied for quite a few marks of “Wyeth” and “Wyeth in Chinese” on goods in Classes 3, 10 and 16 that are closely related to infant goods. Mr. Lu and GW have acted in obvious bad faith.

In addition, Mr. Lu has applied for dozens of marks in many classes, including “Nao Bai Jin in Chinese” and “DETTOL”, which are others’ prior trademarks with considerable reputation, and there is no evidence showing his intention to use them. Mr. Lu’s act to apply for a large number of marks including the disputed marks in this case is an act of hoarding marks in bad faith. His act is devoid of legitimacy and disrupts the trademark registration order.

It took us, Corner Stone & Partners six years to win the final ruling since we intervened in the invalidation proceedings in 2013. The time span is long. The evidence is enormous. During the interim, the Beijing Intellectual Property Court replaced Beijing First Intermediate People’s Court to hear administrative IP cases. Moreover, in practice, the administrative and judicial organs in China still have disputes on which articles of Trademark Law should be applied to remove bad faith trademark applications and registrations. All these factors compound the situation and increase the difficulty of the case.

Wehighlightedthe following points in the documentssubmittedtotheCourt: 1) WyethLLC’strademark“WYETH” together with its Chinese equivalent possess high originality and distinctiveness. They havewideinfluenceandhighreputationonmaternalandinfantfoods in the marketplace. 2) Theapplicantofthedisputed markshasnointentionofusingthemandhoardsalargenumber of other marks whichisdevoidoflegitimacy. 3) GWfullycopiedandimitatedWyethLLCanddeliberatelycommunicatedfalseinformation to consumers. 4) There is a specific relationship between GW, Mr. Guoji LU, and Wyeth (China) Limited. GW’ssupplementaryapplicationsforthe “Wyeth” and “Wyeth in Chinese” marks laterisacontinuationoftheaforesaidLu’spreemptiveapplications, is out ofmore obvious badfaith. 5) Thecontention of a case involving trademark rights authorization and confirmation is whether the mark should be granted registration or not. In light of new and sufficient evidence submittedbyWyethLLCtestifyingpreemptiveregistrationofthedisputed marksinbadfaith, theTRABshouldinvalidate thedisputed markspursuanttoArticle41.1oftheTrademarkLaw.

We endeavored our every effort and won the case in the end. We are delighted to settle the headache issue which had beset our client WYETH LLC for 16 years.During this process, we also witnessed the great progress that China has made in recent years in combating bad faith trademark applications.

5. Lessons Learnt from This Case

1.    China adopts “first-to-file” principle for its trademark registration system. Be the first to file a trademark application in China, even before you have a business plan for the Chinese market, not only on goods/services of your main interest, but also on some peripheral goods/services.

2.    Engage a professional Law Firm with local knowledge and international insight. The law firm should not be too obedient and mechanically follow your instructions. An excellent law firm should demonstrate its foresight and expertise, dare to provide its own valuable opinions and solutions.

3.    If your brand has already encountered trademark squatting in China, take appropriate measures to clear the obstacle and file a subsequent trademark application for registration of your own trademark. Do not give up. Attend every legal proceeding. You will have the best winning chances.

Zhenkun is a leading intellectual property law practitioner with more than 15 years’ experience in prosecuting trademark and patent infringement, unfair competition, and anti-counterfeiting cases. His work with Fortune 500 companies has resulted in the recovery of millions of dollars in damages. As a leading IP litigator, having managed thousands of lawsuits, Zhenkun’s groundwork and strategic insight, coupled with his exceptional relationships with AIC, BQS and PSB at national and local levels, makes him a key leader in intellectual property enforcement in China.

Maggie is a partner of Corner Stone & Partners, a member of INTA Bulletins Committee. She has been practicing intellectual property law in China for over ten years. Maggie represents many international companies in trademark matters including strategy, prosecution, contested proceedings, licensing, well-known status, and disputes. Her practice also includes copyright and domain name registration and enforcement. Due to her deep knowledge and creative problem-solving approach, Maggie helps her clients develop and implement holistic and legally grounded intellectual property strategies in China. 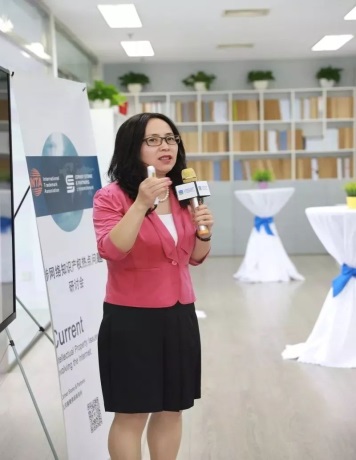 Key Points of The Deal: